Queen of the South striker Stephen Dobbie is poised to sign a pre-contract agreement with Swansea City.

Ten clubs, including five Championship outfits, expressed an interest in the 26-year-old after he scored 24 goals for the Division One side this season. St Mirren were one of the Scottish Premier League clubs interested.

But former Hibernian forward Dobbie looks likely to choose Swansea ahead of Scottish clubs and the likes of QPR, Ipswich Town and Norwich City. Queen of the South avoided the relegation play-offs on Saturday despite a 3-0 defeat by Dunfermline Athletic.

And, speaking before the game, manager Gordon Chisholm was still hopeful of holding on to Dobbie next season. "Stephen has been offered the best contract we could possibly offer anyone as we are desperate to keep him," Chisholm told BBC Scotland.

"There's a lot of competition from down south and the Premier League, but don't underestimate how much we want him."

Dobbie, who began his career with Rangers before spells at Hibernian and St Johnstone, had indicated that he would wait until the end of the season before deciding where his future lies.

"Hopefully, whatever's going to happen will be next week or the week after," he said. 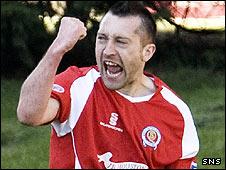 "We're trying to get to third place and we'll see what happens after that.

"I've had a few offers from up here and down south. I just have to sit down with my agent and see what's happening."

His record this season is brilliant. I hope we get him. It's good to see the club sorting out new players already.

The performances on the TV in the FA Cup and our sexy style of football is why we are attracting him.

He might be there tomorrow, how wierd would that be Vs Blackpool, Ferrie watched us before signing Vs Blackpool