Swansea City's no.1 goalkeeper Dorus De Vries can't wait to return to action and is hoping to start on Tuesday night away at Coventry City.

The Dutchman has been sidelined for the past 2 months after breaking a cheekbone during the 0-0 draw with QPR in September.

On-loan shot stopper Dimi Konstantopoulos isn't allowed to face his former club this week so Dorus is hoping to return to the starting line-up.

'I'm hoping to get selected, In fact I can't wait; I've really missed it.

'I've found it strange not playing, especially when you consider I've played virtually every game since I signed for the club 16 months ago.

'I've trained hard, especially over the last week, and I'm fit and can't wait to get back out there.

'It was a nasty injury, but I'm over it and I won't hesitate to go in where it hurts again. Mentally, it hasn't affected me at all.

'In fact I'm back ahead of schedule. The specialist said I would be out for six to eight weeks, but it will be exactly five weeks on Tuesday night.''


Awww i love this guy!!
gotta apriciate his determination to get back playing for the club he loves!!!

Im leavin in 20 mins. Wish me luck. Ill take ur support with me!

Rhos-Jack wrote:Cant see Roberto playing Krysiak for this one now that Dorus is fit

Good luck to whoever is between the sticks.

Rhos-Jack wrote:Cant see Roberto playing Krysiak for this one now that Dorus is fit

Can't even catch a cold. 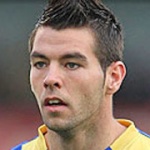